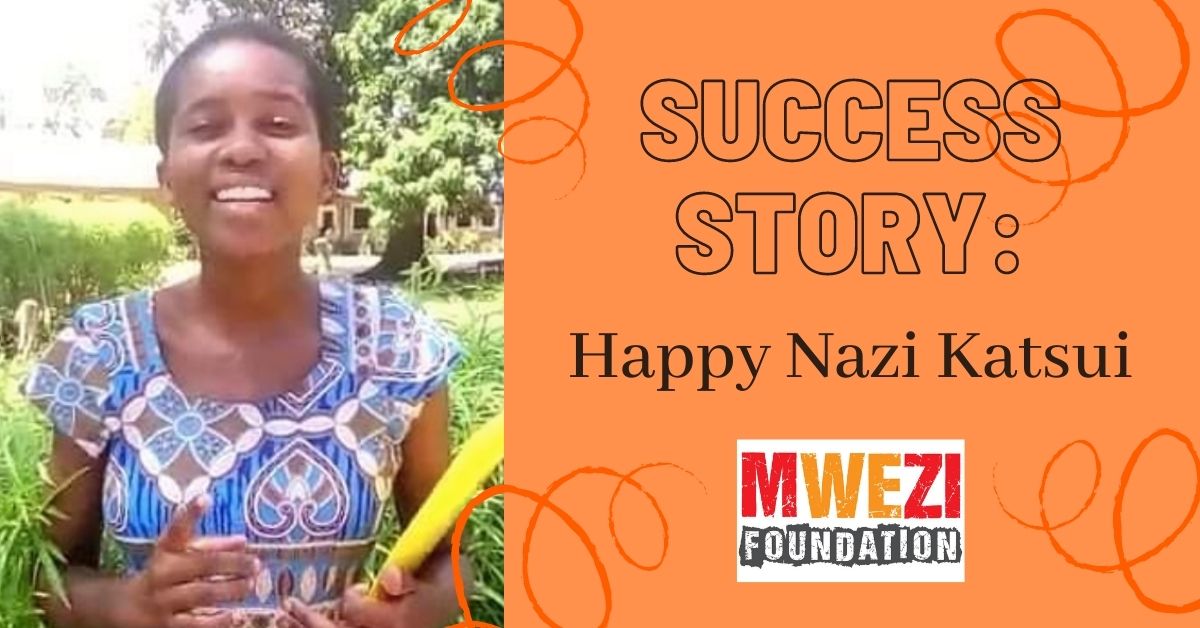 Happy Nazi Katsui was a student at Kasidi Primary School and graduated in 2020. She has seven brothers and sisters, and there is no electric lighting in her home. When she first started studying at Kasidi, the school had no electric lighting either. However, when the Mwezi Foundation began donating solar lights to the school, the classroom was lit for the first time. Happy’s grades improved greatly, as the lights enabled her to study when the sun went down.

“In school I was elected the Deputy Chairperson to lead the students for two consecutive years.” – Happy

Happy told the Mwezi Foundation that, when she was young, she worried that she would be married off due to financial hardship at home. Unfortunately, this often happens when a family is struggling financially, which is why we tend to find that boys outnumber girls in the primary schools that we support. Thankfully, a marriage was not arranged for Happy due to the impressive grades that she was achieving at school.

Happy’s success at Kasidi won her a place at the prestigious Nyabururu Girls’ High School. However, she was unable to accept the place that she had earned because her family could not afford the fees and other expenses that had to be paid in order to send her there. In total, these expenses amounted to £600.

“My parents are not employed and making ends meet is an uphill task. Earlier on I feared that my parents would be tempted to marry me off as others do due to hardship, but when I was rewarded due to good performance in school no one mentioned it again in our home.” – Happy

Happy’s success at Kasidi won her a place at the prestigious Nyabururu Girls’ High School. However, she was unable to accept the place that she had earned because her family could not afford the fees and other expenses that had to paid in order to send her there. In total, these expenses amounted to £600.

At Mwezi, we firmly believe that hard work should always be rewarded, and that children ought to believe that their achievements are not meaningless. That’s why we decided to crowdfund the money that was needed to send Happy to school. We set up a GoFundMe page for Happy and began publicising it on social media.

We were overwhelmed by the responses and generous donations that our fundraiser received. It only took two days for us to exceed the £600 that was required to send Happy to school! In particular, one generous donor contributed a very large sum to our GoFundMe page, which pushed us over our target.

On 9th February 2020, we were delighted to announce that Happy had begun her life as a student at Nyabururu Girls’ High School. She wants to go into cancer research, as a close friend of hers lost her father to cancer.

“I have a burning dream of being a Cancer Specialist in the future. My closest friend lost her father from cancer which was only diagnosed too late. When remembering her tears, I feel I have to do something. I just want to save lives.” – Happy

We wish Happy all the best in achieving her ambitions!